How to Train Your Dog to Stop Biting

All dogs have the capability of biting, even the most sweet, cute, and snuggly ones. And it usually is because they are provoked, cornered, threatened or unexpectedly surprised. But it is important to understand that no neurologically stable dog bites in the presence of its leader without first being given permission to do so. Biting in the absence of leadership may be a dog’s response to a stressful situation. Stressful because the dog is having to make decisions on its own (which it isn’t naturally prewired to do). Their confusion may lead them to feel threatened and afraid. Which can escalate into growling, snarling, baring teeth, licking lips, flattening ears, snapping, and a display of apprehensive body language. All of which can be avoided and/or remedied by neurologically asserting yourself as your dog’s leader. To learn more about why dogs bite and what you can do to help control the problem, subscribe to Speak Dog!™ and learn from the canine language expert, Steve Lankfer!

Dogs without an established leader can bite for a number of reasons. By biting you, dogs may additionally be telling you to get off their territory, that they are sick or injured, to get away from their food, to communicate that they are uncomfortable around new people or children, or that they are having too much fun playing with you! More reasons include:

Whatever their reason is, simply identifying the stimulate and desensitizing your dog to it will not be enough to achieve a permanent result. You have to establish yourself as your dog’s leader. There is no breed of dog that is predetermined to be more aggressive than others, despite contrary belief. If you see an angry dog, just understand that their behavior is the result of non-existent, inconsistent, and/or unstable leadership which can cause a habitual response to stressful situations. 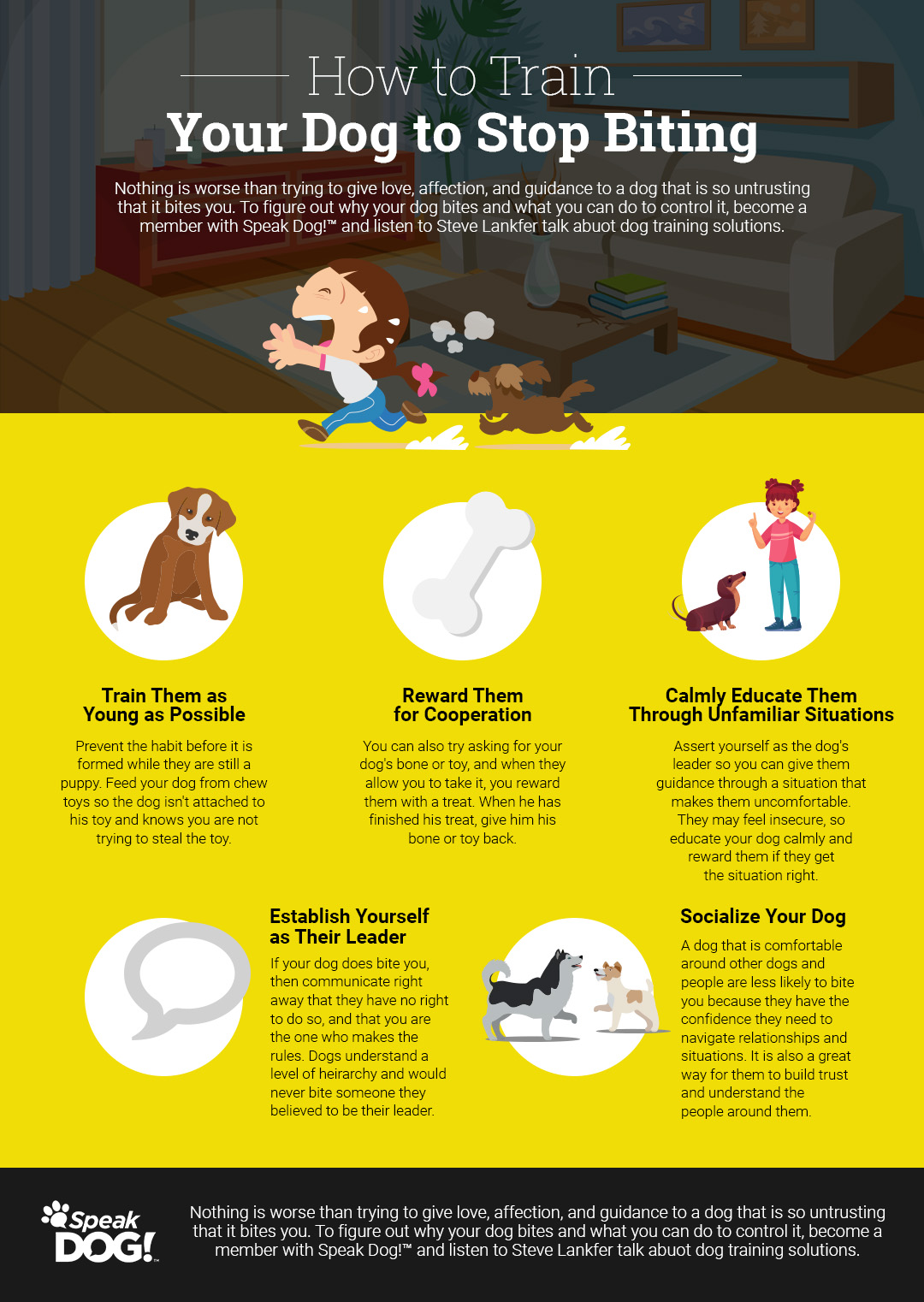 Establishing neurological leadership during a puppy’s early months of biting is a great service to them and their overall social health. If you missed this stage and are dealing with an older dog that feels the need to growl at you when you try to take a toy or bone, then know social health may require a little more repetition; a little more “speaking”. But the overall results of neurological placement regardless of age are the same: Biting will stop. How? Because your dog is biologically wired to need and respond your leadership. They innately are waiting for your consistent tone and timing to correct, instruct and praise them. And they will love you for it!

Bite Inhibition and the Scale of Bite Severity

Bite inhibition is something your puppy should have learned at a young age. This knowledge is acquired by playing and biting other puppies, to learn how strong their teeth and jaws are. They learn how to inhibit the force of their bites before they develop powerful jaws and before their bites become a problem. You may have also heard of this harmless biting as “mouthing.” It means the dog has bite inhibition. Now if your dog hasn’t acquired this knowledge, then it is important during play to use a tone that speaks to your dog like a canine pack member would by squealing/yelping (puppies) or using a firm correction tone (adults). Followed by immediate praise for stopping the behavior. It shouldn’t take very many times doing this for your dog to learn how hard is to too hard during play biting.

How to Establish Leadership with a Dog that Bites

Biting is something that can be solved by connecting with your dog on their level. Very often, dogs that bite or nip beyond play have been unintentionally given a social placement in the home by us, the dogs’ owners. And the dog isn’t seeking your guidance for whether or not to bite. They’ve instead accepted their given position socially. By asserting yourself as the dog’s leader, you are helping the dog navigate the into role that you require.

If the dog feels like it has the right or the privilege to bite you, then you need to communicate right away that they have no right to do so with a firm correction tone. You are their leader who controls which boundaries are acceptable and which are not. A dog should never use their teeth in aggression towards people unless it is professionally trained and instructed to do so. Dogs have an innate sense of hierarchy and, in the wild, a dog would never bite their leader. You are their pack leader now, so it is necessary to learn how to place yourself neurologically as your dog’s leader before biting issues ever become a problem.

Socialization is Always the Indicator

Social brokenness happens when dogs are living in a leadership vacuum. And what that means over the years is that not one who speaks canine, no one who is fluent in canine, has been influential in their life. So the dog is not comfortable around other dogs and people may be experiencing social brokenness which is caused by confusion from the absence of stability. And when they show up somewhere and other dogs greet them naturally they are unable to function. It is very important to establish a stable, trusting relationship before expecting your dog to just get along with people and other dogs socially. Without strong leadership, your dog in any social environment may feel insecure and a sense of chaos which can lead to confusion or aggression. This can result in biting as a reaction to stimuli overload. Even if your dog has a personality that naturally gets along with others, they can be one new stimuli away from biting without a neurologically placed leader there to provide security.

Remember to not punish your dog for biting. Dogs are dogs and will do dog things. Unless your corrective tone is immediate within a second or two of biting, your dog will not know what you are referring to and will end up even more confused. Biting is a response to stimuli just as not biting is a response to stable leadership. Establish yourself as your dog’s neurological leader. For more information, subscribe to Speak Dog!™ and learn with Steve Lankfer about neurological placement!

Steve's Dog Place is the FREE place to talk about dogs, learn about their behavior, brag on your pet and more.